People love to talk about how "practical" different college majors are: and practicality is usually majored in dollars. But those measurements can be very problematic, in ways that might have bad implications for higher education. That's what this post is about.

I'll start with a paradox that anyone who talks to young people about their college majors should understand.

Let's say you're going to college to maximize your future earnings. You've read the census report that says your choice of major can make millions of dollars of difference, so you want to pick the right one. In the end, you're deciding between majoring in finance or nursing. Which one makes you more money?

Correction, 5/24/14: I've just realized I made an error in assigning weights that meant the numbers I gave originally in this post were for heads of household only, not all workers. I'm fixing the text with strikethroughs, because that's what people seem to do, and adding new charts while shrinking the originals down dramatically. None of the conclusions are changed by the mistake.

The obvious thing to do is look at median incomes in each field. Limiting to those who work 30hrs a week and are between 30 and 45 years old, you'd get these results. (Which is just the sort of thing that census report tells you).

That means you'll make 13% more as a finance major, right?

Wrong. This is pretty close, instead, to a straightforward case of Simpson's Paradox.* Even though the average finance major makes more than the average nursing major, the average individual will make more in nursing. Read that sentence again: it's bizarre, but true.

How can it be true? Because any individual has to be male or female. (Fine, not really: but for the purposes of government datasets like this, you have to choose one). And when you break down pay by gender, something strange happens:

Like many examples of Simpson's paradox, this has some real-world implications. There's a real push (that census report is just one example) to think of college majors more vocationally. Charts of income by major are omnipresent. There's even a real danger that universities will get some federal regulation using loan repayment rates, which won't be independent of income, to determine what colleges are doing a "good" or "bad" job.

Every newspaper chart or college loan program that doesn't disaggregate by gender is going to make the majors that women choose look worse than the ones that men choose. Think we need more people to major in computer science, engineering, and economics? Think we need fewer sociology, English, and Liberal Arts majors? That's not just saying that high-paying fields are better: it's also saying that the sort of fields women major in more often are less worthwhile.

How important is gender? Very. A male English major probably makes more than makes the same as a female math major, and a female economics major makes less than a male history major. So the next time you see someone arguing that only fools major in art history, remind them that the real thing holding back most English majors in the workplace isn't their degree but systemic discrimination against their sex in the American economy.***

By the way: you might be thinking, "That's great: the ACS includes major, now we have some real evidence." You shouldn't. Data collection isn't apolitical. The reason that the ACS includes major is because the state has turned its gaze to college major as a conceivable area of government regulation. We're going to get a lot of thoughtlessly anti-humanities findings out of this set: For example, that census department report grandly concluded that people who major in the humanities are much less likely to find full-time, year-round employment, while burying in a footnote that schoolteachers--the top or second-most common job for most humanities majors--don't count as year-round employees because they take the summer off. **** So, brace yourself. One of the big red herrings will be focusing on earnings for 23-year-olds; this ignores both the fact that law (which you can't start until age 26) is a common and lucrative destination for humanities majors, but also that liberal arts majors catch up, since their skills (to speak of it instrumentally) don't atrophy as quickly. Not to mention all the non-pecuniary rewards.*****

So one of the big challenges over the next few years for advocates of fields that include a lot of women (which includes psychology, education, and communication, as well as many of the humanities) is going to be sussing out the implication of the gender gap for proposed policies and regulations. A perfectly crafted higher ed policy would, of course, take this into account: but it's extremely unlikely that we'll get one of those, if indeed we need one. It would be a bitterly ironic outcome if attempts to fix college majors ended up rewarding fields like computer science for becoming systematically less friendly to women over the last few decades.

This isn't to say there aren't real effects: pharmacology and electrical engineering majors do make more money, certainly, than arts or communications majors. But while the gender disparity is a massive, critical element to every discussion of wages, it's not the only thing lurking behind these numbers. (I've only imperfected adjusted for age, for example).

So I'm reluctant to give the average incomes at all, since I suspect that even with gender factored out they might confuse us. Still, it's worth thinking about. So here they are: a chart of the most common majors, showing median income for men and women: the arrows show the shift from the actual median income to what it would be if both genders were equally represented. 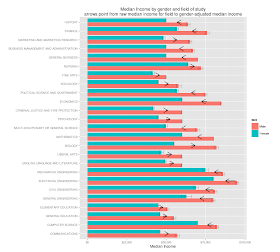 *Actually, this isn't a perfect case of Simpson's paradox, because the male rate is indeed lower; there's a third variable at play here, the size of the gender gap within each field: although it's everywhere, the gender gap isn't necessarily the same size.

**Median incomes usually come out as round numbers, because most people report it approximately; but sometimes, as here, they don't.

***I don't actually recommend you do precisely that, from a lobbying perspective.

**** That's why I've made the somewhat questionable choice of not reducing the set down to "full time year round" workers as is conventional: instead, I'm using the weaker filter of persons under 60 with a college degree who worked at least 30 hours a week.

***** Which, yes, I believe are more important than the few thousand dollars you might get by agreeing to sell pharmaceuticals the rest of your life. But it's critically important not to just cede the field on less exalted measured of success.
Ben at 3:20 PM
Share